A Proclamation by the President of the United States of America

"Our country is blessed to have millions of compassionate citizens who bring love and support to family members and friends who are chronically ill, elderly, or disabled. During National Family Caregivers Month, we recognize these kind individuals who give of their hearts, resources, and energy to assist loved ones in need.

Family caregivers exemplify the true spirit of compassion by providing support to their loved ones and assisting with their everyday activities and special needs. These selfless people must often make great personal sacrifices to maintain the care and support their family and friends require. ...

As we observe National Family Caregivers Month, we honor family caregivers who take time out of their lives to improve the lives of family and friends. Their efforts demonstrate the best of the American spirit.

NOW, THEREFORE, I, GEORGE W. BUSH, President of the United States of America, by virtue of the authority vested in me by the Constitution and laws of the United States, do hereby proclaim November 2006 as National Family Caregivers Month. I encourage all Americans to honor the selfless service of caregivers who support their loved ones in need. ... "

Caregiving: the flavor of "Thanks"giving

Thanksgiving is the genesis of our family’s story of living with Multiple Sclerosis. Flavor it indelibly “bittersweet”.

Pictured is Thanksgiving Eve 1989. Like any typical family our Butterball turkey and 18 month old daughter took turns sliding down the tot slide in our living room. We were typical, weren’t we?

It was to be a perfect Thanksgiving. We were both working, our daughter was healthy, and we owned a vintage 1904 home, two cars, and two cats. We had so much to be thankful and grateful for.

Patti was HEALTHY. … Yes, 4 years earlier Patti had a week or two of temporary and unexplained numbness in some fingers and slurred speech. Only one doctor had suggested “probable Multiple Sclerosis” but testing quickly exceeded symptoms and no culprit was ever ‘smoked out’.

We went to bed planning to wake up and start the day watching the Macy’s Parade on TV.

With the blink of awakening eyes life changed as shock embraced us Thanksgiving morning. Patti awoke unable to see, unable to walk, and barely talk.

For our Thanksgiving 1989, Patti was hospitalized reeling with her first major MS exacerbation. Holding our 18 month old daughter, I was overwhelmed, unprepared, and facing the most desperate moments I’ve ever known.

Thanksgiving morning 2000 I awoke in New York City. Megan was about to perform in the Macy’s Thanksgiving Day Parade as part of the group America Sings. For a whirlwind two days we had been part of all the behind the scenes magic that brings the parade to life. Juggling caregiving and parenting would have been impossible; Patti’s parents were her caregivers for the holiday.

With millions along the parade route, I cheered and yelled and clapped half for survival from the cold <grin> and half for sheer glee. When Megan suddenly appeared directly in front of me and from parade formation shouted a loud “Hi DAD!” it was one of those manly-man moments when I had to choke back tears. <grin> 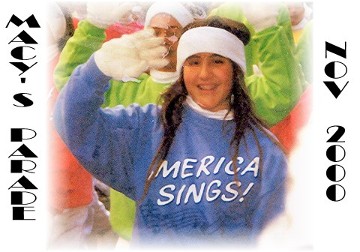 Finding the “thanks” in Thanksgiving is not always obvious, but it’s there. As a caregiver spouse and parent, Thanksgiving and living with Multiple Sclerosis as a family are forever intertwined as bittersweet and complicated memories.

It’s not earlier, it’s not even a couple minutes ago, … it is always NOW. Long term memory so far is fine, the in between is a mess of short circuits.

Patti essentially forgets what she forgot. It is a hang up of the able minded to turn that into an abstract thought. <grin> Instead savor a great laugh a second time, an encore for the able minded, new to Patti.

Enjoying some ice cream over the weekend, Patti inhaled her bowl as she does with all frozen treats. Like most ‘normal’ people, I live in fear of brain freeze, something she is somehow immune to. I noticed her head ticking back and forth like the pendulum on a clock between my bowl of ice cream and her empty bowl trying to work out the difference.

“How Wude!” she exclaimed with a smile as she believed she had figured it out. (And in a fair Jar Jar Binks impression, I might add.) “You’re eating a bowl of ice cream and didn’t give me any.” ... In "NOW", I was guilty as charged. I could only chuckle and dish out half my ice cream into her bowl.

I wonder how many World War II era photographs are fading away stashed in homes? For Veterans Day I scanned several WWII photos I found of our family, daily life in the War in the Pacific, and even a 1944 "Liberty Pass" for Hilo, Hawaii. Then through You Tube I added the haunting bugle call “Taps” and stepped briefly back in time to this most extraordinary generation. 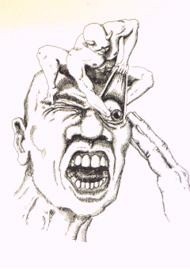 My pain feels like a hot corkscrew suddenly jabbed into my right eye slowly twisting deeper into my brain and then back out over 20 minutes to an hour. Sleeping, working, or driving it doesn’t matter; the attack is always without warning and debilitating.

Pain levels build to where if there is a merciful god I loose consciousness, mostly there is no god just writhing pain.

In the calm that follows I try to recapture the pieces of my sanity.

My Cluster Headaches and Patti’s Multiple Sclerosis have a shared historical timetable. They have been my Achilles Heel as a caregiver. Dr. C Everett Koop, former US Surgeon General claimed “cluster headache patients tended to have more stressful jobs and be self-employed.”

National Hospital for Neurology and Neurosurgery in London describes cluster headaches “as one of the most severe pain syndromes suffered by human beings.” “Far worse” than childbirth or migraines in studies of persons who have experienced all.

Some medications and some treatments help some sufferers take the edge off the pain of some attacks. Somehow you endure.

“People try to remain awake for as long as possible to forestall the onset of a headache they know is coming.” the Mayo Clinic reports, “In the worst cases, a vicious cycle of head pain and sleep deprivation develops." ... My cycles last several weeks to a couple months, and the most frequent time for attacks is shortly after I surrender to sleep.

With an almost conspiratorial dark sense of humor medical studies report a consistent conclusion – “Cluster headaches are, fortunately, rare, affecting less than 1% of the population.”

For 11 months now I have spent on average at least a  ‘working day’ a week battling to keep Patti’s private prescription insurance vs Medicare Part D.

There is no more formidable foe than massive confused government bureaucracy. Your opponent is well staffed, well rested (they work “business hours” and field exactly one call or problem at a time) and knows only that the more paperwork pushed the better a job performance will be rated. “Care” is nowhere in their process.

Implementation of Medicare Part D is also impaired because it is the much ballyhooed social agenda of the Bush administration. Too many spin doctors and too few competent administrators are left in charge.

In a recent study Families USA forecasted problems will only increase next year.

Coverage through the "Doughnut Hole"

“… Unlike most forms of insurance, the Medicare Part D prescription drug program has a hole in its middle. This coverage gap, colloquially known as the “doughnut hole,” is perhaps the most bizarre and troublesome aspect of the Part D drug program.

After beneficiaries reach their initial limit of total drug expenses ($2,250 in 2006), they have no prescription drug coverage until their total drug expenses reach a catastrophic threshold for the year ($5,100 in 2006). While beneficiaries are in the doughnut hole, they must continue to pay their monthly premiums, although they do not receive any drug benefits. Only after they have spent thousands of dollars of their own money to get out of the hole ($2,850 in 2006), in addition to their monthly premiums, does their coverage resume.

The doughnut hole makes little sense from a medical perspective, as it financially penalizes sicker individuals who have more substantial drug needs. It has also generated considerable anxiety among seniors and people with disabilities in Medicare, who fear falling into the doughnut hole and being unable to afford their prescriptions. …”

For Patti, ONLY with her private prescription plan does she retain a hope of a return to homecare and most importantly affordable access to Multiple Sclerosis specific medications.

Caregiving: an adventure in voting

Living with MS as a family we’ve never missed an Election Day. I could ramble on about accessibility and voting rights but the bottom line is that Patti’s choice to want to vote in person makes every Election Day an adventure. <grin>

When we lived in Maryland because Patti’s MS visual and physical symptoms required assistance she had to be accompanied into a voting booth by three poll workers representing the Democratic Party, Republican Party, and an Independent

Three little old ladies (3LOL) each had to read a statement for each lever, and then help support Patti to a standing position so she could pull levers herself. It was accessible voting hell!

One memorable year … well, it all came apart. <grin>

While Patti was behind the curtain being tortured by the 3LOL she began to fall grabbing the voting machine for support and tipping it over.

To avoid being crushed, the 3LOL push up against the falling voting machine. Patti looses her grip and drops into her wheel chair. The voting machine, now, begins to tip in the opposite direction

Rushing to save the teetering machine, the 3LOL stampede into a voter behind the curtain of the next machine. With startled shrieks now four bodies, in too little space, are bumping into and jostling two voting machines much like pin balls.

While back on the other side ... (since Patti never remembers to set the brakes on her wheelchair) … when she flops into her chair she rockets out in reverse.  Her wheelchair slams into yet another voting machine, rocking it and adding its shocked and squawking occupant to the chorus.

Am I’m watching a Three Stooges movie? Machines are helter skelter, a voter or two are still on the floor, the dozens and dozens of people waiting to vote are laughing so hard that strangers are leaning on each other for support, and poll workers are nearing the stroke threshold.

Unfazed by the chaos, Patti rolls up to the frantically huddled poll workers and loudly exclaims, "Excuse me; I don't believe I finished voting."

Ahhh! There is nothing quite as inspiring as democracy in action!

P.S. Election Day 2006 is a family benchmark, our daughter votes in her first election.