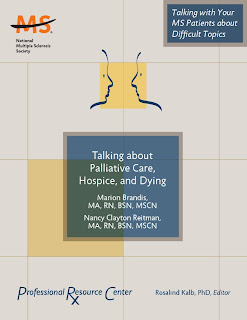 "At whatever point during the disease course you find yourself caring for a person with MS … we feel certain they will benefit from the opening of this door to discussion at some point in their illness."

For Memorial Day 2012 we decided to do something different - go quest for a veteran ancestor. Late last Fall I had played around with ancestry.com stalking dead ancestors with clicks of a computer mouse but now it was time to get real.

Patti’s paternal great-great grandfather, while unknown in her family oral history, still seemed from my research our most promising quest.

George R Decker (1833 – 1915) fought in the US Civil war with the 17th Pennsylvania Cavalry. A lifelong Pennsylvania farmer he fought through and survived three years of Calvary engagements in most of the battles of the Eastern campaign of the Civil War including Gettysburg.

I knew from his Civil War Veteran’s records that he was supposed to be buried in New Freedom Cemetery and after driving around the cemetery and then pushing and pulling Patti’s wheelchair through the tombstones and over many deceased, eureka! we found him .. and his wife, too. 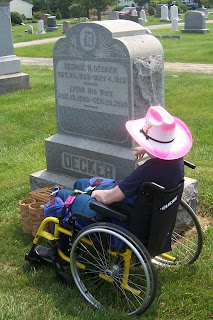 We had brought along a picnic basket and bottles of ice water. ‘Real feel’ temps of 94˚F (34.4˚C) were not Multiple Sclerosis friendly but by frequently applying a frozen bottle of ice water to the back of Patti’s neck, it worked like her personal air conditioning … and our air conditioned wheelchair van was nearby if needed.

To our pleasant surprise and as if conjured up by some ‘Americana’ movie set to complete our picnic, a 'small town America' Memorial Day program was being set up in the cemetery. People soon began to walk by us carrying folding chairs and coolers, scouts had flags and flowers. A small local brass band began to play military songs through the years. 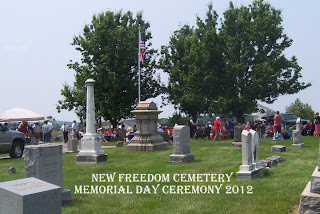 Still hangin’ out with George and Lydia, soon we found ourselves laughing and singing along to snippets from songs such as “It’s a Grand Old Flag”.

As the band finished their tribute to the Civil War including both Battle Hymn of the Republic and Dixie it was a perfect time for us to say goodbye.

What more can you say to a guy who had actually been at Appomattox Courthouse when the Civil War ended … except thank you.

Wednesday, two months after successful lung cancer surgery, everything came back together for the first time. Our world returned to its normalcy.

In other words life is now just as it was before surgery, only 8 weeks later. I have no loss of abilities, restrictions, or pain.

Why should this benchmark start any different than any other caregiving day as I spent too many hours on the phone and on hold working and stressing as Patti’s POA on looming changes to Patti’s Medicare supplemental insurance?

With the cooler part of the day wasted it was time to mow the lawn, walking approximately a mile while pushing a 60 lb (27 kg) mulching power mower in 86˚F (30˚C) temps. 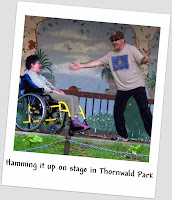 Next I drove to pick up Patti. Exiting her care facility assisted dining room she was quite sure her diner had been “bangin” but had no memory of what she had just eaten.

Heading out to a nearby park for a push and roll (a gentlemen never discusses a lady’s weight but let’s say Patti weighs more than a lawnmower) I pushed her for a one mile loop stopping for some hamming it up in their amphitheater, “all the world’s a stage”.

Then the pièce de résistance (insert drum roll)
… a one person unassisted transfer of Patti from her wheelchair to her bed, followed by undressing and changing her for sleep.

Unlike the miles of pushing, transferring is about lifting non-ambulatory weight. Even after transfer, while many people have changed and dressed an infant, a non-ambulatory adult is the exact same principal just exponentially more upper body strength involved.

It was a godsend that the care facility era was already in place before surgery and recovery took me out of the daily equation for two months. Patti was safe and completely cared for.

Though it’s a bittersweet return to normalcy for me as Multiple Sclerosis memory and cognitive symptoms confound Patti even realizing or remembering any loss in outings or absence of me transferring her to bed the majority of nights each week.

can we afford chronic illness

Kent Sepkowitz, a physician and writer, certainly cut to the bottom line in a recent Newsweek:
Equine Opportunity? It's time to face the facts on expensive medical treatments

While using Multiple Sclerosis as an example because it impacts the families of both US Presidential candidates, his point is with the cost of chronic illness.

“Medicine has reached an odd moment when our cherished American innovation and ambition have given us products that we as individuals each would want, and probably demand, but that as a society we cannot afford…

… This is not bad news, or a “crisis,” or a watershed moment in human history; it is a simple, quiet fact. Yet neither Mitt Romney nor Barack Obama (or any politician) seems prepared to say it…

While there is certainly truth to what he is saying I still believe ‘we the people’ first need to “grow up and face” why are these treatments so expensive?

The line between “American innovation and ambition” and profiteering is too blurred to even see what we can afford.

travels with a faux down vest

“A journey is a person itself; no two are alike.”
John Steinbeck, ‘Travels with Charley: In Search of America’

Visiting a neighbor and recent spouse caregiver widower we share surgery stories. With 9 hrs of back surgery and basically a titanium spine his trumps mine, though bittersweet, of course, since home caregiving for a spouse with RA (rheumatoid arthritis) made his surgery previously impossible.

Wearing my faux down vest to protect my ribs while driving, my return to my ‘road rat’ self was MCing the Prince George’s County Maryland Special Olympic Spring Games.  As if divine coincidence nothing could have been more motivating and rewarding than to be surrounded by heroes. 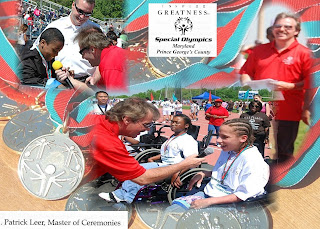 Returning I stopped to visit old friends. Surprised by the home accessibility modifications I realized I've been too wrapped up in my own life. A manly, man hug can often be an awkward dance until ALS (amyotrophic lateral sclerosis) prevents one of you from lifting his arms; I learned what it is to hug a friend.

Pushing Patti around an “Art Walk”, she could enjoy the magnitude of the art of an Italian street painter turned sidewalk artist. However since much of the art was staged in restaurants we soon disappeared into our favorite, Helena's Chocolate Cafe & Creperie for dinner. A chocolate raspberry crepe is art in our book! 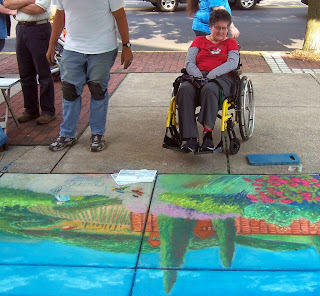 Driving three hours in the rain to visit cousins in New Jersey I sit down to dinner with two other cancer survivors. Still weird to think of myself as a ‘survivor’ and frankly I ‘am not worthy’ contrasted to my youngest cousin who was my inspiration through my darkest moments. Many kids turn 6 every year but this guy also celebrates his 5th year cancer free since battling liver cancer and all the while living with Muscular Dystrophy.

After all how can I say that someone inspired me if I do not let them climb all over me and my ribs to really find out if they are healed after lung cancer surgery?  … Seems I do not need that faux down vest anymore.
Patrick Leer