teach us to care and not to care

"By creating our own stories we learn to take the texts of our lives as seriously as we do 'official' narratives." Sue Austin

Earlier this month a reader commented on a March 2011 entry, butterfly effect MS caregiving “Hi everyone, I was a caregiver to my brother with multiple sclerosis for 15 years. The last 2.5 years were very difficult because my brother's disease was progressing at a very rapid rate. As a caregiver, I was often tired. Sometimes I was overwhelmed / depressed. I shared the responsibility of taking care of my brother with my mother. My mother was more overwhelmed than myself. My brother was diagnosed at the age of 17. He died December 29 2012 (aspiration pneumonia) at the age of thirty two. I miss him tremendously and at this time I am devastated. I can only say to caregivers to find a way. I would give anything to be a caregiver for him again. It was all worth it.” 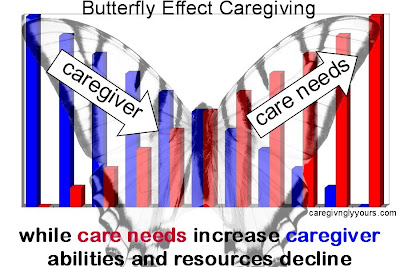 Around the same time struggling with a sinus infection (at least I hope it is) for the first time in my 23+ years of spouse caregiving I could not lift Patti out of bed unattended and had to rely on the facility hoyer lift to get her into her wheelchair for an outing. … I was reminded of a line from that very same entry “The toll on your health will shorten your life, up to 10 years less than a non-caregiver, and its quality.”

Throw in the one two punch of Ash Wednesday’s dust to dust theme and Valentine’s Day Memories: the Good The Bad The Ugly from a year ago when I was concealing my own lung cancer diagnosis and I find myself wallowing in whether I am creating a story like ‘Ash Wednesday’ by T.S. Eliot
“Suffer us not to mock ourselves with falsehood
Teach us to care and not to care
Our peace in His will”

Or more like Joni Mitchell’s “Big Yellow Taxi”
“Don't it always seem to go,
That you don't know what you got
Til its gone”

Sharing our story has always been about preventing long term family caregiving for severe Multiple Sclerosis from disappearing from the ‘official’ narrative.

Inspired by an entry in Middle Age Mania, Get Out of Hell Free Card....

People have shared with us that, “The Lord works in mysterious ways” enough times over the 27 years since Patti was first diagnosed with Multiple Sclerosis to probably qualify for an entry in the Guinness Book of Records.

Those ‘mysterious ways’ challenge faith. As the spouse caregiver, watching Patti decline over nearly a quarter century (and over a three year period burying my father, mother, and only brother) I've certainly had, have, and will have contentious streaks in my relationship with God, fortunately always staying just beyond the ‘smite with lightning bolt’ threshold.

Patti believes my faith matters, so allow me to pull back a curtain. My paternal great grandparents, including the original “Patrick Leer”, who I am named after were immigrants from Ireland and my bedrock is Irish Catholic.

Decades ago wanting to have our daughter baptized Catholic we were told our marriage would first have to be validated. Patti’s Lutheran baptism and our marriage outdoors by an ordained Lutheran minister were unacceptable to Rome.

Even though Patti desired to convert, once a wheelchair was required it became a game changer for accessibility. Frankly juggling spouse caregiving and basically single parenting was more important.

A week ago, taking Patti out for lunch I was reminded by her care facility staff to have her back by 1:30 PM for her “Catholic thing”.

That “Catholic thing” would be the Feast of St. Blaisé, “through the intercession of Saint Blaisé may God deliver you from the ailments of the throat and from every other evil….”

Considering how often choking has nearly killed Patti, invoking the intercession of St. Blaisé is not a bad idea with Multiple Sclerosis dysphagia.

“Care” is rooted in the “Golden Rule” universal to ALL religions.
----------
PS many find it easier to comment via Facebook link than hassle with Blogger spam captchas. ... Readers are always welcome!
----------
Patrick Leer
Health Activist:

Living in Pennsylvania Dutch influenced Central Pennsylvania today was as good excuse as any for a lunch outing for Fastnacht Donuts.

Picking Patti up at her care facility we headed over to Café Nell’s at nearby Shurfine Supermarket.  A pair of cinnamon sugar Fastnacht donuts and a cup of real decaf coffee made for one happy Patti.

Fastnacht translates from German as “eve of the fast”. In days of yore, the Fastnacht was made with all the sweets and forbidden items in the household to eliminate temptation during Lent. A local radio station called them 'a donut on steriods'. J

Don’t get me wrong it’s not that her care facility does not serve nutritious lunch but every once in a while there is nothing wrong with embracing the Multiple Sclerosis modified principle of Mardi Gras “eat drink and be merry … because I just want to take a nap”.

Brushing Patti’s teeth for her and transferring her from wheelchair to bed with a one person unassisted transfer … I tucked her in for a long winter afternoon’s nap.

With all due respect to the residents of the New England states, between Feb 5 – Feb 10th 2010, Snowmageddon dumped 35” (88.9 cm) of snow on South Central Pennsylvania.

Yeah, it disrupted lives for a week, but the beauty of a storm like this was to be enjoyed. 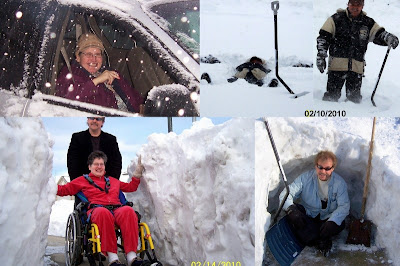 Living on a corner property snow plows only added to the depth for  'snow spelunking' opportunities before breaking through on Valentine’s Day!

No snow blowers were used in the making of this collage.

it takes a team

Televised american football always has that moment when the cameras zoom in on a coach prowling the sidelines like a giant insect in headset with antennae.

Yet in real life there is no ‘sideline’, nor are there grown men running around in spandex jumping on each other.

Driving in one direction to visit a neighbor in a hospital recovering from surgery our daughter heads in the other direction to pick up Patti for an outing from her care facility where she finds Patti finishing her dental checkup.

Not only do I love dentists that make house calls to care facilities but even better when they call me on my cell phone to give me the update knowing Patti’s memory sucks. Which also gives me the opportunity to share my own diagnosis of lung cancer and that the young adult spinning in the therapy chair will sooner than later be taking over as Patti’s POA. … priceless!

Rendezvousing at home we play Trivial Pursuit xBox 360.  With our daughter operating the controller for all of us the game moves along well. Patti can actually see the questions on our screen plus with crowd sounds from cheers to ooohs it has a stadium feel to it.

Later preparing Patti for bed I notice a strange brace laying on her bed, when I ask about it the LPN claims its Patti’s. “No way!” I exclaim I even have a picture of her braces I can email when I get home.

Next day I get a call from physical therapist explaining that everyone was correct. Patti’s knee contracture braces were changed a couple months ago from the type on the left to the style on the right. However since she only wears them at night this is why I likely I had never seen them.

Yesterday I get a call that Patti’s doctor wrote an order for speech therapy evaluation. CNA’s in ‘assisted dinning’ were noticing Patti was increasingly ‘pocketing food in her mouth’. Leaving a message for therapist, I hear back from her within the hour and we briefly chat, I do have two decades 'hands on' experience with Patti’s dysphagia including with what I call “chipmunking” but I learned is officially called ‘pocketing’.

Patti is unable to direct her own care. Someone has to coach her team both on site and off. A good ol’ flip phone is all I need … of course living with my lung cancer diagnosis, a ‘coach in waiting’ spinning in chairs never hurts. J