Maybe it’s the combination of reading other Multiple Sclerosis related blogs and the dawn of the 23rd year of our own story of living with MS but my heart goes out.

Maybe Guns N’ Roses was right, “... Nothin' lasts forever … and it's hard to hold a candle in the cold November rain …”

Others all seem like such youngens either chronologically or in terms of MS progression. I pray they all can stay forever young, stay forever mild. It sure doesn’t get any easier.

Whatever, as long as I can still push a wheelchair and the first snow falls it was time to get Patti out for a push and roll through the park adjacent to her care facility. 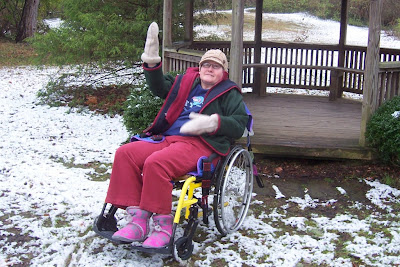 MS dementia symptoms are such cunning thieves. Patti enjoys the ‘now’ of the push and roll but she quickly forgets as she remembers her longer ago pre-MS times skiing.

Then it was home for dinner and back to my ongoing project to extend Patti’s self-feeding for as long as possible. Thanksgiving and Thanksgiving left overs are not exactly dysphagia friendly food and require me or someone to feed Patti along with verbal cues. 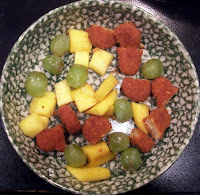 On the other with the flick of a switch our gas fireplace leaps to life as I hand Patti a bowl she can self-feed with cut up MorningStar Farms vegetarian buffalo wings, cut up mango spears, and grapes to enjoy in front of a fire after a push and roll through the season’s first snow.

One way or another we all live 'in the now', some of us just remember it.

What is your caregiving 'prime directive'?

Any Trekkies out there? Any ‘normals’ remember the Prime Directive, Starfleet’s General Order #1? (Trivia answer at the end)

The point here is that as spousal and/or family caregivers we each have our own Prime Directive ... and as National Caregivers Month 2012 comes to a close, why not share?

Mine has always been, is and I suspect always will be Patti’s ‘safety’.

Our story began so dramatically with Patti awakening on Thanksgiving morning 1989 suddenly unable to walk and barely about to see and talk with her first major Multiple Sclerosis exacerbation that I was baptized by fire into the world of caregiving and medical advocacy … while somehow juggling our 18 month old daughter in my arms.

Yes, Thanksgiving Day is a “tradition” for others but for me it’s become more like a minefield of challenges to my prime directive of Patti’s safety.
Bottom line – did Patti enjoy the time? ‘In the now’, yes!

Though MS related dementia erases each holiday moment as it happens, more like an etch-a-sketch Thanksgiving. Driving away when Patti cannot tell me what we just did, it does make me wonder about the equation of risk vs reward.

And for the first time in 23 years facing my own health issues, a lung cancer diagnosis, I realize I may not be able to be the linchpin in future caregiving equations and wondering what is more important traditions or prime directives?

P.S. As promised for trivia buffs -  the Prime Directive dictates that there can be no interference with the internal development of alien civilizations. … Ooops, those original Pilgrims must have missed the memo from Starfleet.

A friend sent me an old picture over the weekend which considering the whole significance of this Thanksgiving week … well, it’s kind of hard to look away … a whole lot of irony, what ifs and more. 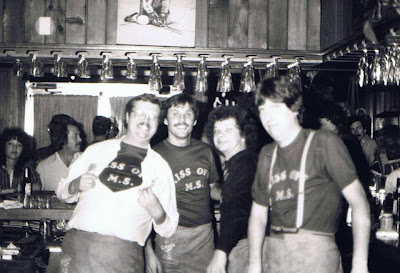 Time traveling to the early mid 1980’s; pictured here we were participating in a “Kiss Off M.S.” promotion, a bar room version of the kissing booth. $5 donation to Multiple Sclerosis got you a kiss.

I’m quite sure I had no clue as to what M.S. was about. However standing behind a bar while women paid $5 to kiss me … come on now what’s not to like about a night like that.

Though we were dating, Patti and I would not be married for a couple years and likewise I doubt if Patti had ever heard of MS.

I find myself pausing to reflect on my coworkers flanking me for they would go on to live ‘normal’ lives. Yet today they both ‘rest in peace’ while I may be the only one left standing to hit this send button ... so I better not dawdle.

Any time I ever try to explain this concept to Patti I find myself slipping into some mutation of “I is the IS and you is the WS as you are me and we are all together … I am the walrus, goo goo g'joob.” We just end up laughing and by then her Multiple Sclerosis dementia related symptoms have erased the conversation and we can simply start over again … or not.

Among the technologically too cool of modern social media, IS = ill spouse and WS = well spouse. Obviously we are out of sync perhaps that is because our story began in the last Century.

Thanksgiving morning will mark the beginning of my 23rd year as my wife’s spouse caregiver.

Caregiving was consequential when it began for me.  Former First Lady Rosalynn Carter was about the only person making noise. And frankly some stigmas were making my life harder. Multiple Sclerosis was, and is, portrayed as mild. Anyone successfully juggling both caregiving for a spouse and basically single parenting had to be a woman.

Oh yeah and this thing you are using to read this was not around. We went to our neighborhood library for information.

I can still remember the first time years later that I discovered someone like me out there in this mysterious place called the Internet.

Today when I cruise by ‘on line’ support groups or pages they seem so adversarial to me, more about WS vs IS.

It’s OK to not like caregiving moments, Lord knows I get that.  Maybe it’s about too much access too soon. I know for me if I pause to take a deep breath then what I have to say comes out different.

Bottom line it’s always been about choice. Patti did not choose to be severely disabled with MS. I chose to give care.

If advice from an old dude is even germane anymore … as insane as caregiving moments have driven me over the decades, I have always tried to remember it is the MS I hate not the IS.

Not Your Friend’s MS Caregiving

Reading the latest issue of NMSS Momentum I was intrigued by their cover article “Not Your Friend’s MS”.

I found myself reflecting on how many Multiple Sclerosis spouse caregivers, family and or friends who actually provide care or one day may need to provide care are not affected similarly by the phenomena of “Not Your Friend’s MS Caregiving”?

Around the same time, misfiled on a library shelf I found a copy of “Mainstay: for the Well Spouse of the Chronically Ill” written in hindsight by a MS spouse caregiver, Zane Kotker under the nom de plume, Maggie Strong. Most importantly to me at the time, she wrote about caregiving for severe and progressing MS until her husband’s death … ‘not your friend’s (mild) MS’ as portrayed everywhere else in MS publications of the time. Today Zane Kotker continues her writing career but as a fiction author under her own name living in the Pioneer Valley of Massachusetts. That original 80’s book “Mainstay” spawned what today is known as the Well Spouse Association.

These two long ago, pre Internet advocates for caregivers back when I was starting are good examples of the range of philosophy of “not your friend’s caregiver”.

Neither is right or wrong! Yet in the beginning, who among us does not search for or want to be inspired by the ‘right plan’ for the future. That is until unpredictable twists and turns of fate leave us all … living the ‘best of possible’ lives. 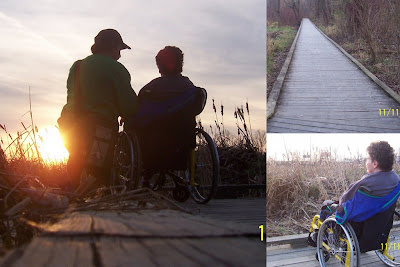 
Awareness sometimes is just reality biting you in the ass. 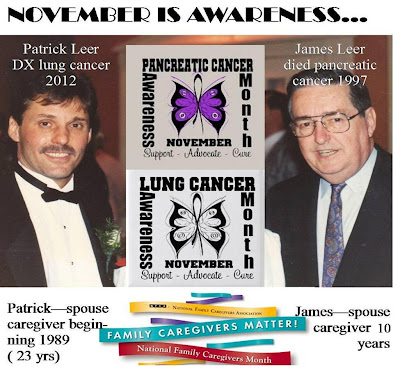 My Dad became my Mom’s caregiver spouse in 1987 when she suffered a massive stroke in ICU following carotid artery surgery. … I became Patti’s spouse caregiver when she awoke Thanksgiving morning 1989 unable to walk and barely able to see or talk and by afternoon was hospitalized with her first major Multiple Sclerosis exacerbation.

November is also designated Pancreatic Cancer Awareness Month. My Dad died of Pancreatic Cancer 15 years ago. I spent the longest night of my life holding him, talking with him and sharing “the time of angels” ... I have been there for the closing chapter of cancer. That’s the kind of awareness that just does not pigeonhole into a month.

It’s difficult not to notice the common denominators of long term spouse caregiving and cancer. Cause and effect? I seriously doubt it but then I’m left to pause and wonder if ‘the deadliest cancers я us’ isn’t becoming some macabre family tradition. More likely, spouse caregiving equals long term stress which does take a huge toll on the immune system.

To paraphrase Shakespeare from the Twelfth Night, ‘Be not afraid of awareness, some are born aware, some achieve awareness, and some have awareness thrust upon them.’

Voting with us is not unlike the delicatessen scene from the movie “When Harry Met Sally” after Meg Ryan demonstrates a fake orgasm and the older woman customer remarks to the waiter “I’ll have what she’s having.”

Other voters look up from their computerized voting screen toward ours wondering why theirs is not so entertaining. 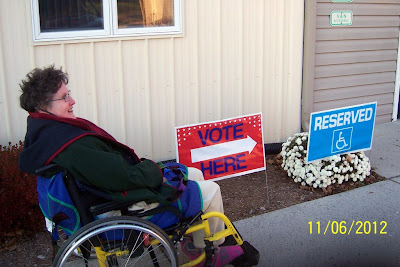 That’s because they are not assisting a voter with severe Multiple Sclerosis with symptoms including legally blind and severe short term memory loss at the top of her myriad of cognitive challenges.

Having just finished reviewing Presidential choices including third party candidates, I turn to Patti and quietly ask her who she would like to vote for. … In a booming voice one might normally reserve for yelling from the top of a football stadium (because MS frequently lacks volume control) Patti declares “I think they are all assholes!” … and dissolves into self-bemused laughter.

The guy next to us laughingly remarks to a poll worker “How come my machine doesn’t have that choice?”

Eventually and while having more fun than two people should in a polling station we do finish voting.

Yes we, or I should say I could cop out for us, and do a mail in ballot or any of the other accessibility options but Patti prefers to participate in voting at local polling places. Accessibility to us has always meant inclusion not exclusion. … and if it can be enjoyable along the way than all the better.