Last night, the nursing station informed me Patti was displaying cold symptoms. … They expressed concerns about an outing and risks of exposure. … Flu vaccinations had apparently missed whatever strain is currently epidemic. … Multiple Sclerosis is an out of whack immune system, throw in a cold and you’re brewing germ pot luck.

Any way … Care Facility Caregiving 101 preaches that you try to include the patient in their care planning and decision making. Patti’s conclusion, “I just want a f*cking cigarette!”

So we headed out for a brief “isolated” outing.

While Patti happily stayed in smokey quarantine in the van, I 'quickly' ran into the store for some items. Following are some spouse caregiver shopping thoughts …

While I understand the cost efficiency, institutional facial tissue is from a different world than Kleenex® Brand Lotion Tissues with Aloe & Vitamin E. Let’s face it when you will be blowing your nose often, THIS is your best friend.

Patti likes Olay Body Wash plus Lotion Ribbons. Personally, I am an Irish Spring kind of guy so this is all alien to me, except that institutional body wash seems to resemble Lysol for humans.

I have no strong feelings about cold lozenges. Personally I am a fan of ZICAM® for colds. Patti however, at best, can self-administer by sucking on lozenges so COLD-EEZE® seemed the ticket since it shares Zinc in its formula with ZICAM.

Unrelated to this outing but on the topic of product discussions …

BAG BALM Yes, this salve for cow udders produced by the Dairy Association Co since 1899 can be and is used for Depends rash, and accommodates care facility budgeting.

While I do not doubt its effectiveness and 100+ years of success, there is just something about discovering your family member is being soothed with cow udder salve that motivates you to drive directly to the store to buy anything.

However, in the interest of fair AOL Journals(ism) I have a dear friend who sees this differently -- a decorative tin of Bag Balm as an always appropriate and unforgettable ‘hostess gift’.

caregiving: memory loss IS NOT a normal part of aging???

“Memory loss is not a normal part of aging?” Seeing that title in my email this morning triggered high anxiety while I tried to ‘remember’ where I just put my reading glasses when making coffee.

Reunited with my ‘wandering’ reading glasses, I read on.

(Karen Roberto, director of the Center for Gerontology at Virginia Tech) said family members reported distress at having to take on the other person's responsibilities or at the changes in the marriage or parent-child relationship.”

“The care partner experiences a loss of independence and a loss of time for personal interests,” said co-researcher Dr. Rosemary Blieszner, associate director of the gerontology center. “The definition of MCI has been that it does not significantly affect daily life -- but sometimes that is not true.”

“The researchers also asked the families the type of information they would like to have. In response, the Center for Gerontology published a brochure for families, "Mild Cognitive Impairment – What do we do now?"

The brochure contains information on how to recognize symptoms … when to seek a professional diagnosis … strategies for compensating for memory loss … advice to the care partner on how to care for oneself … how to prepare for the future.”

I suspect “memory loss” lurks among those monsters under the bed of every aging adult. Caregiving and living with Patti’s Multiple Sclerosis, we never saw it coming.

The family member who begins to demonstrate symptoms of memory loss is the least conscious and maybe the least willing to embrace professional discussion.

That step into caregiving through the thunderhead of surrendering personal independence challenges and reconstructs any family.

wheelchair transferring (how we do it)

Transferring has been discussed often in this journal. Recent news articles have sadly reflected the risks to someone bed bound or non-ambulatory. If a person is unable to get from point A to point B, a caregiver or help becomes necessary.

Join us for a three minute glimpse into how we deal with transferring.

I will confess that shooting this video with all those transfers and more in such a short period of time was grueling. There are no stunt doubles in caregiving. <grin>

Caregiving: grievances for the disabled and chronically ill?

The American Federation of State, County and Municipal Employees (AFSCME) filed a grievance over the punishments for the 11 dispatchers disciplined for mishandling fire victim Brenda Orr's 911 call.

Brenda Orr, bed bound with Multiple Sclerosis, DIED!!! The 911 dispatchers were “punished” with letters put in their files. And they and their union are complaining??? … Incredulous!

“...Tom Tosti, the business agent for the union, did not respond to repeated calls for comment...”

Where is the love? … Well, a whole lot of it is in the people and the hearts behind this story.

·     Wheelchair distribution was the vision of American contractor Brad Blauser

·     Wheelchairs are made by prisoners in South Dakota,  delivered by U. S. military

“We've got so many children out in the city that the ones who can get around are following their friends by dragging themselves around on the ground, which is heartbreaking to see," …

On April 27, 2004 I sent into cyberspace my first paragraph.

“Why share? I hope to make my daily life easier. One hat you wear as a spouse/caregiver is "designated medical information press agent" <grin> and this way I only have to share once a day. In a larger view, most people will have to walk this path eventually. Why buy some book, feel free to peek in….”

I did not have a clue if I had even done it correctly or if anyone would ever read a word about caregiving for Multiple Sclerosis. ‘Blog’ was what our then 16 yr old did. What was I trying to do?

15 months ago Jackie of "LifeInBama" encouraged me to expand into You Tube videos. Sharing exploded with this 21st Century communication tool. Some time this past week You Tube viewers passed almost 4 years of readers. 25,000+ viewers have clicked and watched “Caregivingly Yours Videos". (average: 1,669 “peeks” a month)

With demand snowballing, I launched www.CaregivinglyYours.com six (6) weeks ago. To make it easier for new readers, journal entries are categorized and entry highlights quicken any search.  5,323 hits have found the web site since its launch on December, 21, 2007. (average:  3,548 “peeks” a month)

Invisibility too often cloaks disabled people or those with a chronic illness as their needs increase. The story of the tragic death of Brenda Orr was as invisible in the news, outside of the immediate Philadelphia area, as most likely was a ‘bed bound’, 53 yr old woman with Multiple Sclerosis in life.

From that first paragraph four years ago through today’s growth sharing was also about ending invisibility.

I thank everyone who has taken a “peek”. You have enriched our journey.

Glancing around me, I admit there are not any more ‘hands’;  yet caregiving sure feels a lot less alone. Thank You for joining us!

musings from the lair of Cachalot

snow, ice, and a snow angel

A SNOW ANGEL FOR VALENTINE’S DAY

Brenda Orr had multiple sclerosis and was bed-bound. She called 911 the morning of Jan. 29 to report that her bed was on fire and she couldn’t get out.

“… Her 911 call rang in the Bucks County emergency communications center seven times — and 27 seconds elapsed — before a male dispatcher answered and said, "911. Can you hold one second please?"

Orr answered, "I can’t. This is an emergency. 911 emergency. Three-four-zero Doyle. Bed on fire."

But, on a recording of the call, it sounded like the man had already stepped away from the phone.

No one spoke for another 27 seconds.

County officials will not say what happened or why no one spoke to Orr during that time.

A female dispatcher picked up the phone 55 seconds into the call and asked for the location of the emergency.

Since Orr was calling from her home phone and the county has what is known as an "enhanced 911 system," Orr’s address showed up on the dispatcher’s computer screen. County Director of Emergency Communications Brent Wiggins said the dispatcher still had to ask for the address to make sure it was correct. There was nothing in the 911 system to indicate that Orr was disabled.

Orr calmly and clearly repeated her street address — "Three-four-zero Doyle [Street]" — three times as the dispatcher asked if she lived in a township or borough.

"All right. Well, you wanna get out of the house?" the dispatcher asked.

"No! I’m disabled," Orr answered. "The bed is fully inflamed."

For the remainder of the recording, the dispatcher is heard trying to talk to Orr and asking a co-worker if she should stay on the line. …

Caregiving can certainly wear anyone down. Valentine’s Day hoopla may seem more like a Care Bear’s nightmare? 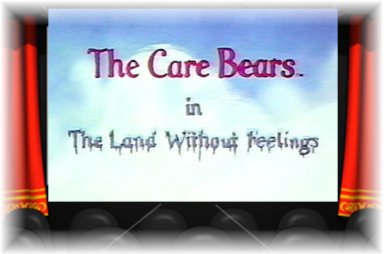 As any survivor of the 80’s remembers the Care Bear Stare would send magical light beams of care out of their tummy symbols restoring the balance of caring in the world. 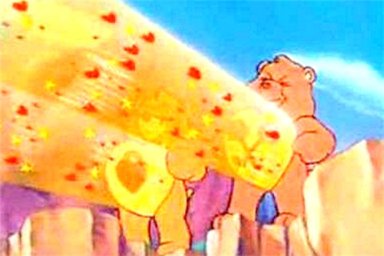 I wonder how much rubbed off from animated bears to people caring for people. That generation of parents is most likely facing caregiving concerns and that generation of children is now watching their parents in ‘real life’ confront care as a reality.

Andy Warhol once asked, “Does art imitate life or does life imitate art?”

Caring Valentine’s Day wishes to all,

Baghdad, Iraq (CNN)  “… Two mentally disabled women were strapped with explosives Friday and sent into busy Baghdad markets, where they were blown up by remote …The bombs killed at least 98 people and wounded more than 200 at two popular pet markets on the holiest day of the week for Muslims… “

The slaughter of innocents is monstrous. Using mentally disabled people as weapons is inhuman?

musings from the lair of Cachalot