Incontinence may be intellectualized by doctors but from a caregiver’s perspective incontinence trumps.

With progression of Patti’s Multiple Sclerosis she is totally incontinent both for bladder and bowels. Add into the mix a wheel chair, a non-ambulatory patient with cognitive impairment and you have more than a challenge.

I think it is safe to assume that most people have changed a diaper on an infant. An adult’s diaper is the same concept just on a grander scale.

Incontinence also means whenever. Anything and everything else planned has to accommodate the need to change Depends and usually clothing.

Yes, all manufacturers promote their product does not leak. If your faith is based in US advertising, then bless you. However, I will say after a decade of caregiving for incontinence that Kimberly Clark DEPEND® brand leaks less.

Picking Patti up on Saturday for her parent’s holiday party my nose told me something was not right. Patti claimed that she had just been changed and just wanted a cigarette. I wasn’t buying.

Preparing to change her myself I found myself shortly assisted by 5 aides and a lift. I think operating rooms have less people.

Later driving back she experienced more bowel incontinence. Changing alone was not going to be adequate, a shower was needed.

Timing was bad as aides were all busy getting other residents to bed so I charged forward.

First, dead lifting Patti from wheelchair into bed so I could get her clothing and Depend off, then dead lifting her into a shower chair to roll into the shower.

Soiled clothing and bed linen I quickly tossed in hamper Depends and wipes in trash.

Observing me, the LPN put meds on hold and pitched in finding me extra wash cloths and towels, rounding up fresh linens, and making the bed.

After shower I dead lifted Patti back into bed, whipped on new Depend, nightgown, and rolled her regular wheelchair into the shower as it too needed a cleaning.

All's well that ends well, as Patti was falling into sleep as I turned out the light and sloshed out in soaking wet shoes.

A Christmas letter of One Solitary Life

Christmas can be particularly poignant for caregivers and those they care for. Holidays are benchmarks of the past, present, and future.

Reflecting how life does not always fit into a bombastic Christmas Letter, I remembered sitting in Radio City Music Hall with our daughter a few years ago.

Mesmerized with their Christmas Spectacular I felt like a kid.

Yet the scene I remember the most was their living nativity and experiencing for the first time “One Solitary Life”, a 1926 sermon by Rev. James Allan Francis.

In a sense the first modern Christmas Letter … 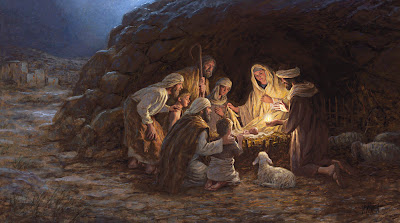 "He was born in an obscure village,
A child of a peasant woman.

He grew up in another obscure village
Where he worked
In a carpenter shop until he was thirty.

Then for three years
He was an itinerant preacher.

He never had a family.
Or owned a home.

He never set foot inside a big city.
He never traveled two hundred miles
From the place where he was born.

He never wrote a book or held an office
He did none of the things
That usually accompany greatness.

While he was still a young man, the tide
Of popular opinion turned against thim.

His friends deserted him.
He was turned over to his enemies.

He went through the mockery of a trial.
He was nailed to a cross
Between two thieves.

While he was dying
His executioners gambled for the only
Piece of property he had, his coat.

When he was dead, he was taken down
And laid in a borrowed grave.

Nineteen centuries have come and gone
And today he is still the central figure
For much of the human race.

As powerfully as this
One Solitary Life."

While there certainly is nothing wrong with pride in winning a soccer tournament, getting all A's, or even just being able to get out of bed in the morning; try to see the love and care at the core of Christmas.

Wishing you all a safe, family filled, and Merry Christmas!

In a recent study of MS patients, … 62% reported speech and voice impairments. Cognitive problems can be a barrier to communication. … 48% displayed cognitive dysfunction

While pushing Patti through the aisles Christmas shopping, a young girl wearing reindeer antlers and jingle bells was leaping about wishing Hello and Merry Christmas to all ...

… until she was stopped in her tracks by Patti’s, “Hello! You little brat.” Patti was NOT in a bad mood, her MS was preventing her from communicating appropriately.

These are the caregiver moments when I wish I had a big sign “MS Zone” or something. Then again what would that even mean to most people.

Dysarthia, in which the capability to understand, remember words and construct sentences is not lost but the ability to speak clearly becomes affected. Slurred speech, together with impaired mobility, can sometimes lead to accusations of drunkenness or decreased intelligence.

Dysphasia, in which there is a lack of understanding of what is being said and an inability to recall the vocabulary and grammar necessary to build a sentence, hesitant disjointed speech affects confidence and demands patience on the other end.

Disinhibition is one of the rarest behavioural symptoms of MS and linked to MS-related damage in the brain. People experiencing disinhibition may have little or no awareness of others' feelings regarding their actions. Making a hurtful or inappropriate comment is frankly the milder end of a loss of their sense of social rules.

Attempting to defuse the moment by introducing ourselves to the formerly happy child , I hoped that putting names to faces might help Patti.

Realizing this was going nowhere, it was easier to offer the child a conspiratorial wink and a whispered aside, “Don’t let her bother you, she’s really the Grinch in disguise.” … Recovering with a giggle she bounced off happily.

A birthday present and an ideal caregiver's home companion! 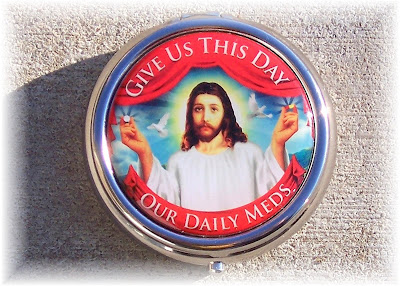 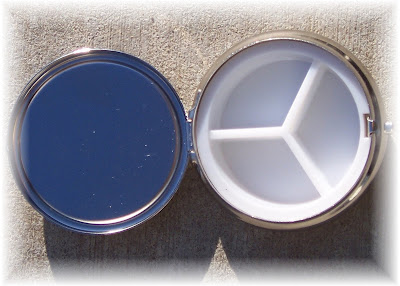 Special thanks to the Multiple Sclerosis Foundation for enabling our story to bridge from the blogosphere to print media.

"A Caregiver’s Perspective: MS and Cognition" will appear in their Winter 2009 edition of MSFocus Magazine. Below is an excerpt:

"Our then elementary-age daughter discovered the first clue: Her mom laughed hysterically at the word “brick.” Then came the day I opened our monthly credit card bill to find $2,000 in charges from a home shopping network. Homecare agencies cancelled our aides due
to incidents involving my wife, Patti’s, verbal and physical outbursts. Finally, I returned home one afternoon to discover our stove top on fire while Patti sat unconcerned or unaware at the kitchen table.

Looking back, were there earlier clues that my wife’s MS symptoms might not stop with the physical? Yes, but who knew to look? We were still reeling from the physical symptoms of Patti’s diagnosis and trying to learn to live with MS as a family. In a few short years, my wife had become wheelchair-bound. We were swamped in physical adaptations, and in the early and mid- 90s, cognitive problems associated with MS were simply not mentioned very often..."

After years of journaling it was fascinating to work with a different medium including submitting copy, editors, revision, and such.

This journal / blog began, in part, four years ago because the challenges of people with progressive and severe MS, their caregivers, and families were invisible to mainstream MS publications.

Thank you, Multiple Sclerosis Foundation for this opportunity.

Exhaustive information has always been available through CMS however, this works much like the more consumer familiar restaurant or lodging 5-star systems.

After checking it out this morning, I must offer applause for user friendliness and simplicity.

However, I also must also caution that searching and deciding on 24/7 care is NEVER simple. Certainly use this new tool as a start.

Then visit, visit, and visit again. Your impressions and what you actually see and feel is far more important than data. Care is always about people.

caregiving: one third of my life ...

One-third of my life has been spent as a spouse caregiver. I discovered this trivia while playing with a calculator on this last day of my 57th year.


Do I have any pearls of wisdom to offer? Yes, never stop building snowmen! 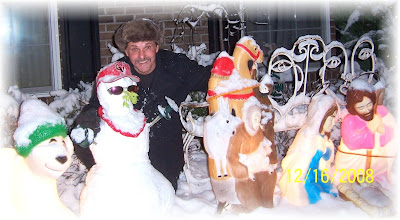 With 3 inches of snow for an early birthday present it was time to realign the feng shui of kitsch.

While we put lights on our tree last night, Jingle All the Way played on ABC’s 25 Days of Christmas. 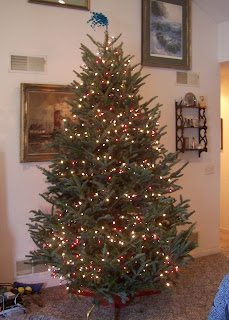 As any caregiver knows, “we” means I climbed up and down and all around illuminating our 9’ Frazier Fur. The rest of the cast of ‘helpers’ chomped cookies offering encouragement and compliments.

It was impossible not to reflect on a comedic scene from the movie released Thanksgiving weekend 1996 involving Arnold Schwarzenegger and Sinbad battling their way through a Christmas shopping stampede. Filmed with Hollywood craftsmanship, special effects, and stunt people you get comedy.

Twelve Thanksgiving weekends later, in reality, you get tragedy. I read that a cell phone video posted on You Tube shows a police officer crouching by a man lying at the entrance of the Valley Stream, 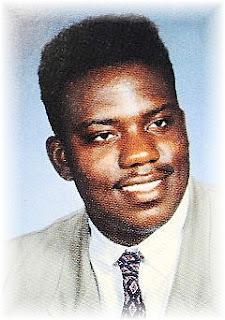 NY Wal-Mart. Shoppers peer from behind glass doors or stand a few feet away, audio-enhanced chatter captures "They need to shock him," a voice says … another cracks a joke … women laugh.

The coroner ruled Jdimytai Damour, 34 died of suffocation. He could not breathe trampled under the stampede of Christmas bargin shoppers on frugal Friday, black Friday, or whatever.


Valley Stream, NY may not be all that unfamiliar. Snapple Beverage Co., and the drink itself, started there.

Portions of the film “Goodfellas” were filmed in Valley Stream.

Sounds more like the fictional Bedford Falls than the kind of town where a life is less valuable than saving a few bucks.

Or is it that we, regardless of where we live have forgotten to care or even what we care about?

What does this entry have to do with caregiving? Everything! One day, EVERYONE will know or love someone who cannot care for themselves. God help us!

Opening December email has been like opening an Advent calendar ... 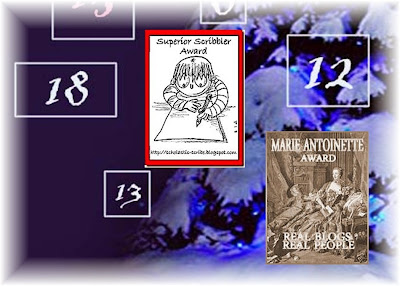 and finding a wonderful award behind each day.

THANK YOU Julie of Julia's New Journal and Amanda of This is me Hugs for your kind remarks and awards.

OUR story as told in Caregivingly Yours is really a story that writes itself. If I could pass along awards it would be to everyone who takes the time to visit here and share our story. Thank You!

The American College of Physicians, is urging its members to offer testing to all patients older than age 13 for HIV, the virus that causes AIDS, as a way to identify people who unknowingly carry the disease and might pass it to others. 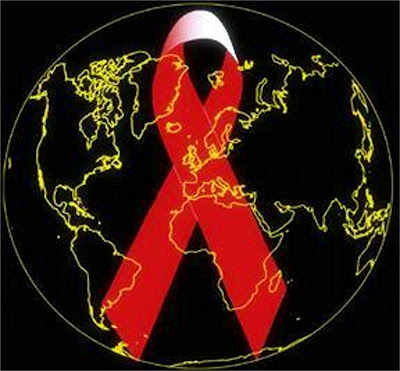 “ACP recommends that physicians adopt a routine screening policy for HIV and encourage their patients to get tested, regardless of their risk factors ...”

Ignorance and fear are deadly ALL the time, not just on December 1st, World AIDS Day.