“Living with MS” as a family has always been challenging but the future of “family” is enigmatic with Patti’s increasing progression in 24/7 care and Megan now living away at college. In another year who knows? ... Why not try a FAMILY 'road trip'?

Traveling with Patti is about traveling with Multiple Sclerosis. More specifically MS with a level of disability creeping ever closer to 8.5 (MS is measured on a scale of 1 to 10).

At her care facility she is assisted in activities of daily living by two attendants and a variety of cool mechanical lifts. “On the road” it’s just me and ever changing unknown environments.

Frankly the most intimidating to travel are MS symptoms of total bowel and bladder incontinence Once a person crosses a certain threshold of cognitive challenges catheters are no longer an option. Patti once ripped out a Foley catheter with no memory of how or why. And while obviously a guardian angel kept her from rupturing herself, it did end the catheter era.

Incontinence caregiving demands physical strength and creativity. It also centers your day around both the periodic and spontaneous need to change Depends, change clothing, and often shower. You need to find a way and the time to do laundry on the road. Keeping in mind that Patti can never be left unattended, it may seem overwhelming.

If you want a family activity you accept family for all that it is. As a caregiver you do not simply “fit a square peg into a round hole”, or “think outside the box” … you have to constantly reinvent the damn box. <grin>

13 comments:
Email ThisBlogThis!Share to TwitterShare to FacebookShare to Pinterest

Homer should be writing this entry as it seemed the gods were determined to actively disrupt our departure.

Our timetable first collapsed under the double whammy of hurting my back with the first solo Depend change at home while packing, then an almost simultaneous disabling Cluster Headache.

Inches of rain continued to fall as I rolled Patti in an out of the van for last minute scatter brained errands.

Finally with the van fully loaded with suitcases, electric scooter, and Patti secured in her wheelchair I turned the ignition key only to discover clicking noises instead of the roar of the engine. … Hours ticked futilely by as I unloaded eveything and tried to arrange for service and towing on the Friday before Christmas weekend. Grrrrr!

Instead of Philadelphia, Patti and I spent Friday evening with a bag of Wendy’s food in the waiting room at National Tire and Battery. Patti kept the spirit alive pointing out that it was a treat to have Wendy's. She couldn't remember when she last had a Wendy's burger. Pausing to glance around she added, "but my memory is terrible, I don't even know where we are." <grin>

3 comments:
Email ThisBlogThis!Share to TwitterShare to FacebookShare to Pinterest

Do you ever wonder if things happen for a reason? Instead of arriving on the rainy, miserable previous day; we arrived in Philadelphia to sunny skies and temps that peaked at 60 degrees! Yes, 60 degrees!

It was spectacular for scootering along the waterfront park from our hotel, Hyatt Regency Penn's Landing (pictured looming over the harbor), to South Street, Philadelphia’s version of Greenwich Village. Where we met our daughter to drop off her hotel key as she had been waiting in line since before noon for an evening CKY concert.

US HISTORY embraces you in Philadelphia. We all had to memorize it in school but walking or rolling across the ground can give me chills.  … Or maybe it was just the bone jarring cobblestones. (How about just a few symbolic cobblestones? I get the point, but this is the 21st Century.) I have no doubt the Founding Fathers would gladly embrace concrete or asphalt if available to them. <grin>

We continued scootering along the water front parks basking in the spectacular weather. Tall ships, gunboats, and monuments are perfect for Patti’s visual impairments and the wider, less congested, park style paths were ideal for scootering.

We docked with our van at twilight to head into the center of town for Christmas decoration viewing. Rittenhouse Square had been recommended but didn’t impress Patti. We rolled from Rittenhouse Square to the City Hall Christmas Tree. A surprising treat were all the corporate lobbies/atriums along Market Street leading to City Hall. Banks and Corporations seemed almost to be ‘competing’ for best lobby.

Philadelphia City Hall is a spectacular back drop to the city Christmas Tree and most important to us even the ornaments were large enough for Patti to see and sit and enjoy on a balmy night. 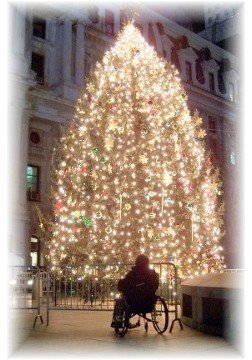 Simply getting Patti up, showered, dressed  and checked out is a bit like trying to work on fly paper, but as long as I allow at least double the time it can be done.

There were only two quests for this morning before leaving town. A pilgrimage to the Rocky statue and a Philly Cheese Steak Sub for lunch.

For Christmas Eve morning it was another beautiful Spring day, and traffic and crowds were light. For a lot of reasons the statue was at the base of the steps of the Museum of Art which was “ideal” for scooter access. After these three days I FELT like a triumphant Rocky and couldn’t resist flaunting the pose in the picture.

Again the gods tried to interfer on the very last extension of our wheelchair ramp on this trip as we prepared to leave the Museum of Art. Megan and I manipulated the ramp closed manually. (When I purchased the van I had opted for this specific model ramp because it could be easily manipulated manually just in case the gods interfered.)

We found a deli two blocks away and savored our Philly Cheese Steaks Subs right in the van. Patti surprised me handling the sub with no problem with either her hand spasticity or dysphagia. (maybe I should feed her in the van more often? <grin>)

“… if I can go that distance, you see, and that bell rings and I'm still standin', I'm gonna know for the first time in my life, see, that I weren't just another bum from the neighborhood.”            Rocky Balboa

You just have to love this 21st Century where not only do you send out traditional touch and feel holiday cards, but you get to scan an Internet version for your “extended family and friends” … 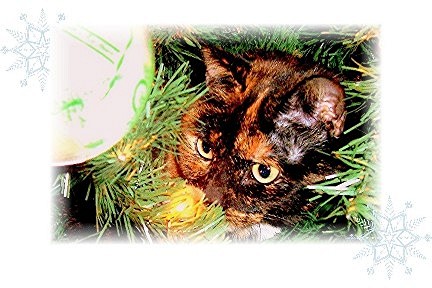 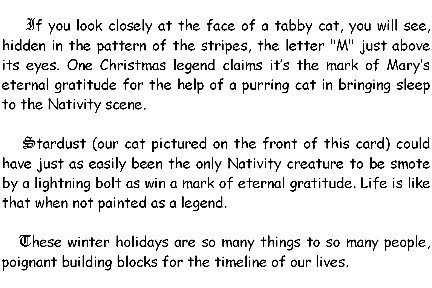 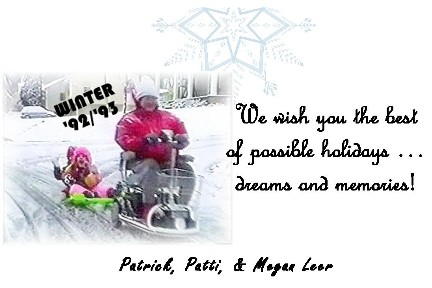 8 comments:
Email ThisBlogThis!Share to TwitterShare to FacebookShare to Pinterest

This is a back to the basics entry about technology for the disabled. The embedded link is to 4 minutes and 23 seconds of our remarks at the Pennsylvania Assistive Technology Foundation Press Conference from the State Capitol Rotunda in Harrisburg back in late September. (“Our” is a misstatement, as soon as the flashbulbs started popping and camera lights powered on Patti decided to clam up. <grin>)

For readers in other States or in other Countries, who knows they may be able to point you to help in your home area.

“… Dashing through the snow, in a one (SCOOTER) open sleigh.”  ??? ... You're invited! Step back in time through the magic of You Tube. Double click the video and join us for a minute ride.

Early in a snowfall before it got too deep or the plows or salt trucks got out, Patti’s “one-scooter open sleigh rides” were a winter tradition.

While converting our old VHS tapes to DVD I often find views like this of what it was like adapting to living with MS as a family. … And proof that kids will grab snow from anywhere and eat it! <grin> … (Just don’t eat the yellow snow!)

9 comments:
Email ThisBlogThis!Share to TwitterShare to FacebookShare to Pinterest

Multiple Sclerosis casts a long shadow. In our story my health as a caregiver always exists in shadow. I suspect that’s true for most caregiving relationships.

If any day of anyone’s life were shown as a painting it would of course be shown from the artist’s perspective. However, for a caregiver any injury, illness, or condition that itself might be labeled disabling is trumped to the background and that’s that.

Back on Nov 10th … I shared Caregiving: Cluster Headaches - my Achilles Heel. The beast continues to rip and shred my sanity from my head. I grovel to find and reassemble the pieces, only to repeat this dance of madness hours later.

It is always weird while doing research to read of the spouse caregivers and family support of Cluster Headache sufferers. MS prevented Patti from helping, rather she needed my help. Megan was a child and didn’t need another parent who couldn’t help her.

It always seems to go back to perspective. … As long as I’ve been a caregiver, I don’t believe I ever given much thought to what it is like to receive care.

Anyway … this journal may continue to collect some dust over the weeks ahead. That’s NOT perspective, just some days those last pieces of the sanity puzzle are tough to fit together. 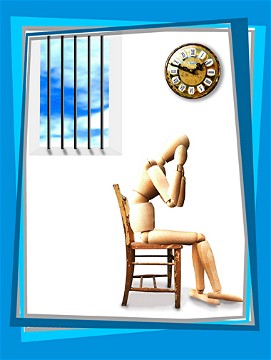 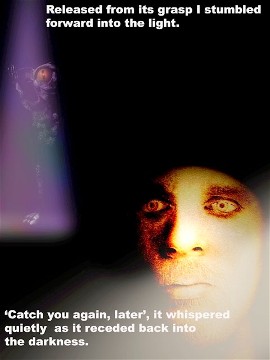