Unless we stumble over it, we literally and figuratively see what is in front of us.

Most people might never see Multiple Sclerosis because the general population has <1% chance of having MS.

Additionally, of those diagnosed with MS the majority may have symptoms “invisible” to strangers.

Prevalence invites awareness and MS remains rare especially contrasted to cancer, heart disease, Alzheimer’s, stroke, or diabetes. Can the sound of one voice in 700 (the statistical incidence of MS) hope to be more than a silent scream?

Soooo, am I the only one noticing that Multiple Sclerosis prevalence is totally out of statistical whack when viewed in the context of our current US Presidential Primaries.

Ann Romney, wife of Mitt Romney, was diagnosed with Multiple Sclerosis in 1998.

Marianne Gingrich, former wife of Newt Gingrich, reports Newt asked for divorce just months after she had been diagnosed with Multiple Sclerosis. 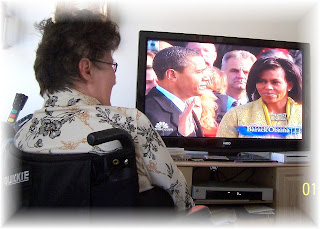 And on the other side …

US First Lady Michelle Obama was raised living with Multiple Sclerosis, her father had MS.

This is an extraordinary and exceptional alignment of MS awareness, yet do you hear it?

27 years ago I, like most, had never seen or even heard of MS. My awareness began when I saw Patti’s tears and heard her sobbing, “the call”. “…The caller explained Patti was crying uncontrollably and could I come get her. … Upon arriving I found Patti still crying alone in an examination room. Her neurologist appeared and explained he had told her that “she probably has Multiple Sclerosis…”

Like comets that travel through once in a lifetime perhaps never again will Multiple Sclerosis be a part of the lives of so many major players on our public stage.

In the USA, the Month of March is designated for Multiple Sclerosis Education and Awareness. Open your eyes and ears. 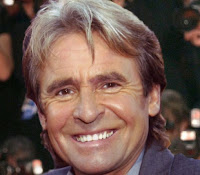 Following death of former “Monkees” star Davy Jones of a heart attack on Feb 29, The Hollywood Reporter reports Jones' family is asking for donations to be made to the National Multiple Sclerosis Society or a local chapter. Jones' niece died from complications stemming from multiple sclerosis 17 years ago.

Maybe the silence isn't so deafening after all.

when more than homecare is needed Multiple Sclerosis 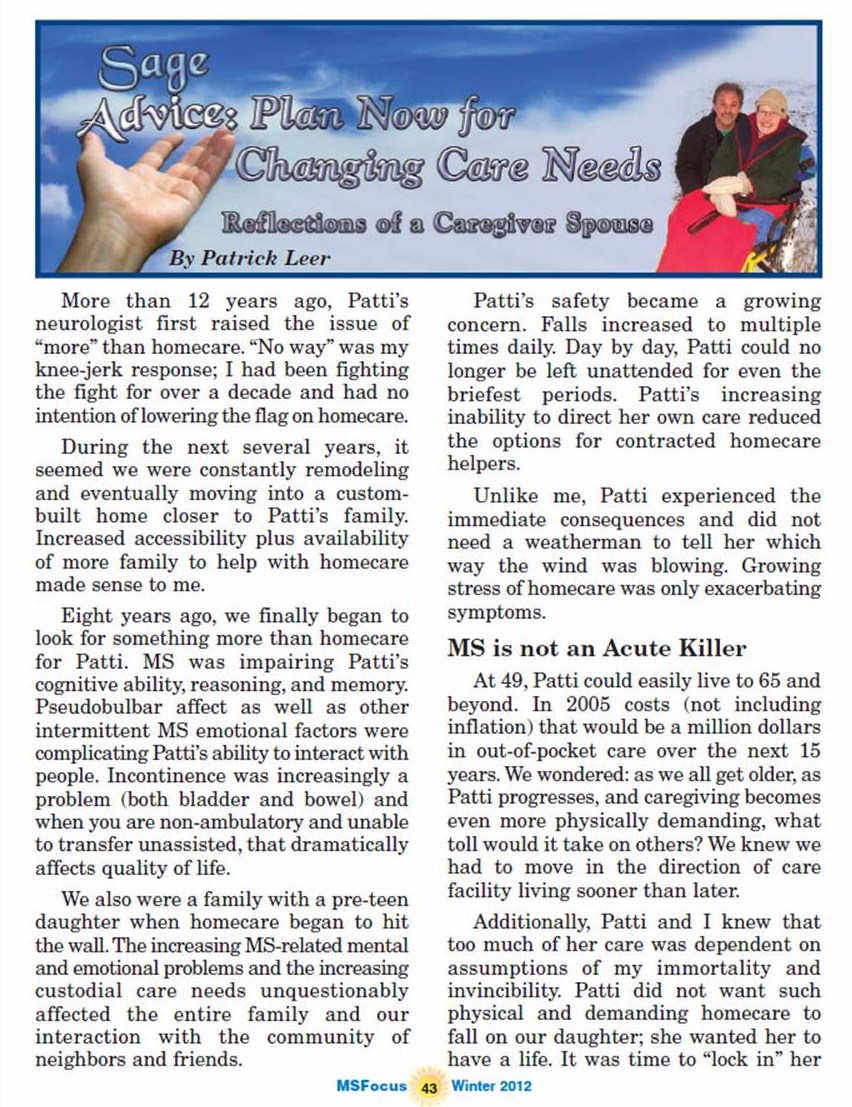 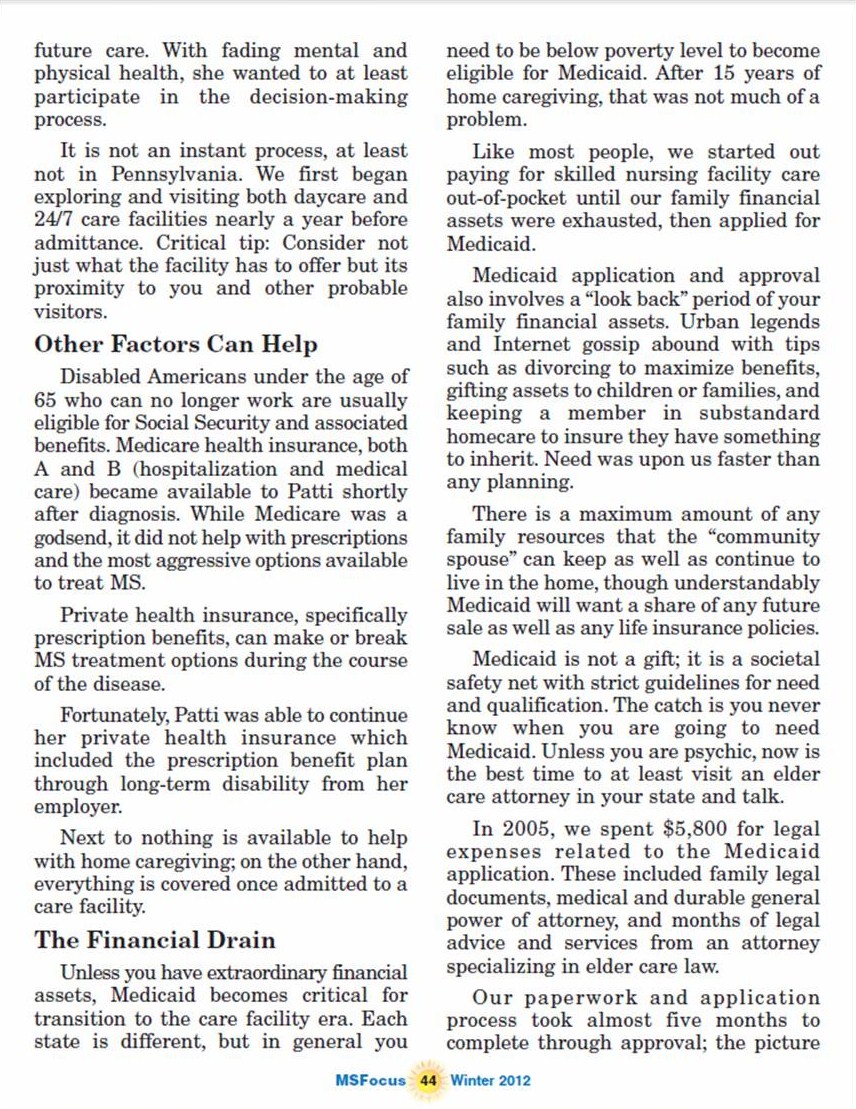 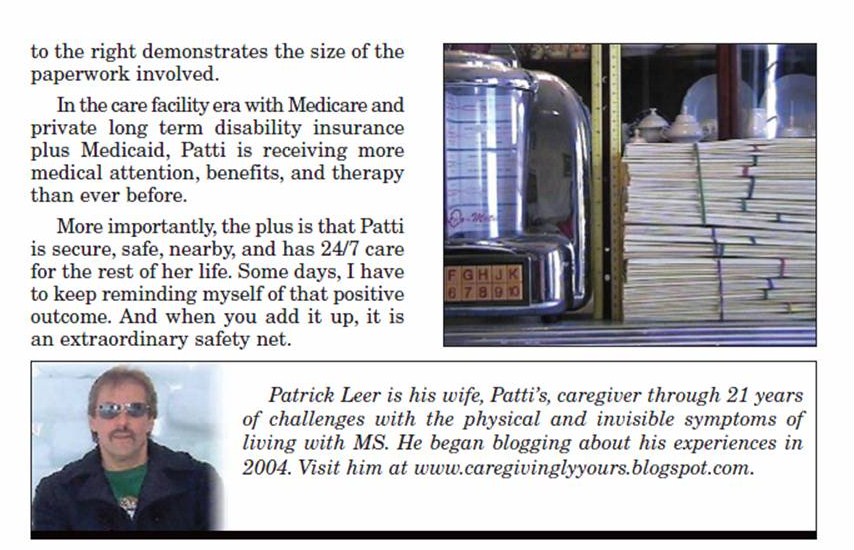 Long story made short Patti was less than cooperative at her last failed checkup. Fortunately there is a positive end to this story.

Believe it or not there’s at least one dentist who prefers the freedom of not having an office practice, traveling between care facilities and nursing homes.

Rather than just leave it alone he called me with a plan.

What if … he revisited after Patti had been given a dosage of Ativan/Lorazepam beforehand, the proverbial “chill pill”. Adding me to the mix could improve success because in the care facility era “no means no” for professionals, only family/POA can ‘persuade’ a patient.

Arriving I transferred Patti to a geri-chair, a recliner on wheels.  I was blown away by the mobile dentist office set up, it had everything except musak.  (Rummaging about I found a boom box and a CD of new age music and fixed that.)

Patti (under the influence of Ativan) was a model patient and the dentist was a godsend. Patti’s dentist prefers the life of mobile dentistry. He loves its freedom and its focus on patients.

Patti’s teeth were cleaned, polished, and cavities filled. Only the high speed drill which sprayed water seemed to agitate her. I quipped it was just the tooth fairies waterboarding her. “Little bastards” she mumbled and with a smile her calm returned.

Afterwards, we talked about new solutions because status quo is not working. Apparently an electric toothbrush is a win-win because in a pinch it can be used simply with water, eliminating the whole rinse and spit challenge. Regardless of MS and all its challenges, dental care cannot be trivialized. Brushing teeth is social behavior. Visiting or outings should include teeth brushing rather than depend on staff, remember staff can be told ‘no I don’t want to’. Thinking outside the box is a must. 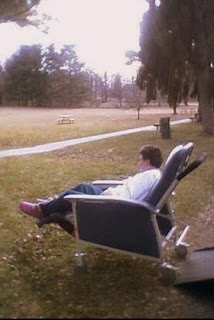 Since it was 60˚F (15.6˚C) afternoon in February, and the geri-chair fit in our wheelchair accessible van, I took Patti to the park in her rolling recliner for a reward before a well-deserved afternoon nap.

"A new study suggests the Chinese herb known as Chang Shan selectively weakens the runaway immune response implicated in many autoimmune disorders, such as rheumatoid arthritis, multiple sclerosis, and psoriasis."

As we begin this 27th year since Patti’s diagnosis of MS, I wish I could embrace hope with the enthusiasm of a quarter century ago. 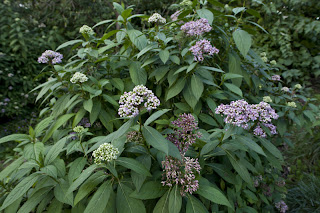 Now before everyone goes digging up neighborhoods, nurseries, and botanical gardens for roots of blue evergreen hydrangea let’s take a moment.

At the risk of oversimplifying … Our healthy immune system depends on T Cells. ‘Rogue’ T Cells have long been considered a culprit with MS. ‘Rogue’ T Cells cannot distinguish friend from foe and target the body’s own myelin as if it were a bacteria or virus. Finding a way to suppress the ‘rogue T Cells’ without suppressing all T Cells has been the challenge.

Now in Feb 2012 after peer review and further retesting ...
“We recently demonstrated that halofuginone (HF) …inhibits the development of TH17-driven autoimmunity in a mouse model of multiple sclerosis” Halofuginone and other febrifugine derivatives inhibit prolyl-tRNA synthetase

With publication in Feb. 2012 Nature Chemical Biology, associated media and more are picking up the story.

Again at the risk of oversimplification, Chang Shan is the herbal form, Halofuginone is the synthetic.

Interestingly back in 2003, SunCatcher Herbs, developed Sclero-Eze, a herbal supplement that uses Chang Shan as a base. Their website announces “may Treat - Rheumatoid Arthritis - Scleroderma - Lupus - M.S.”

From a quarter century of experience I can share that breaking research on mice can take a decade before availability to humans, if ever. On the other hand while the herb is available it was not the herb that was tested.

However, no one can imagine another’s hope.

As a caregiver spouse Valentine’s Day is at best a one sided exercise. Yet marketing drives society and well look around the annual emotional ‘carpet bombing’ has begun.

Progression of Multiple Sclerosis symptoms both physical and cognitive long ago eliminated ever receiving any Valentine’s Day gift, gesture or even remembrance.  It’s such a ‘healthy couple only’ media blitz it only leaves me feeling more isolated and alone than usual. The caregiver perspective is expressed well in “Valentine's Day - Fleeting Fluff” by Terri Corcoran.

Maybe it always was illusion? As a college student I double dated with a friend on Valentine’s Day. Splurging on the memorable kind of restaurant it seemed a night and place framed for romantic love. Until my buddy decided to seize the moment to announce he was breaking up with his girlfriend.

Also long ago in my years on the road I knew someone who falling head over heels in love with a woman drove hours with that seething passion and imagination of romantics to surprise her and ask her to “be mine” forever on Valentine’s Day. She instead surprised him, having settled down with her ‘true love’ and asked him to leave her alone before he ever opened his mouth.

Maybe romantic love isn’t an illusion but a delusion?

Valentine’s Day also is not really even a holiday. Companies, schools, and governments go about business as usual. My Mom’s body was cremated on Feb 14th. There’s a figurative coffin nail in Valentine’s Day memories.

And for whatever reason snow storms and blizzards enjoy visiting around Valentine’s Day and I could not be happier. Snow is nature’s “hug me”! 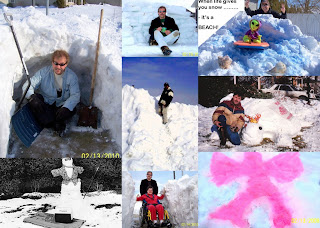 
“loneliness, helplessness and boredom are the three plagues of long-term care”  Eden Alternative

“Don seemed to me to be going downhill, and a couple of the staff also suggested that he was deteriorating. …Then the head nurse came up with a different theory and a different solution … Don’s got cabin fever, that’s all. … Here’s the thing. …  It only took a day or two, and Don was back to himself again.”  Multiple Sclerosis Carer: Stir Crazy

Recently I found myself in a similar situation with Patti and dinner. She was ‘reportedly’ finishing less of her meals and just wanted to go to bed. I began moving up my arrival time to be there to help with dinner.

One such meal stands out. Arriving I saw Patti had finished her entre and overheard her yucking the aide’s offer of her fruit cup or potato soup and that she ‘just wanted to go to bed’. 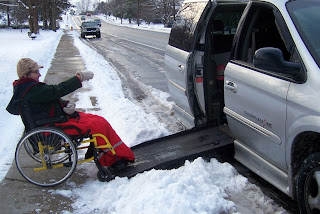 Soup is a function of temperature more than taste to Patti. Hot is not appealing. Hey we’re talking about cream of potato soup here. The cooler it gets, the more pretentious it becomes. Rolling out my best bad French accent, Patti enjoyed her ‘vichyssoise’ assisted by zee crazy french waiter.

Instead of another unfinished meal, there was not a crumb left nor did Patti 'just want to go to bed'.

If the testimonials of two Multiple Sclerosis spouse caregivers, a long term care non-profit, and NIH is not enough - then consider that even circling sharks pause to stress the importance of family involvement. Boston nursing home abuse attorney Bernard J. Hamill, “ensuring safe care is continued family involvement. There is really no substitute for this.”